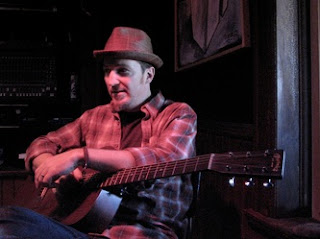 
Peter Mulvey is no stranger to , or to Ballymore; he has been touring here regularly, and to critical acclaim for fifteen years or more. This time, he brings with him a new album: an eclectic collection of influences and styles.
Twenty-odd years on the road, performing songs from his
own catalog and from a vast, varied, and deep well of classic
and obscure covers, has amounted to a distillation process, from which has condensed the pure drop, the good stuff, as it were.

THE GOOD STUFF, Peter Mulvey’s fifteenth record, is a collection of standards which promptly rejects the accepted definition of “Standard” in favor of a more vivid, open approach. The music of Tom Waits is right there with Duke Ellington; Willie Nelson next to Thelonious Monk; Jolie juxtaposed with Bill Frisell. Mulvey (along with his band, the Crumbling Beauties) address each tune with a true artist’s touch. His mirthful, gravelly baritone is front and
center from moment one, and every track is a master class in restraint, phrasing, and commitment.

Globe: “Peter Mulvey is all substance, which is his style.”
Mojo (): “Singularly gifted.”
: “The cream of the crop... sings with a clarity reserved for the likes of legends.”

THE IRISH TIMES: “Peter Mulvey is consistently the most original and dynamic of the singer-songwriters to tour these shores... A phenomenal performer with huge energy, a quick-fire, quirky take on life, and an extraordinary guitar style... a joy to see.”