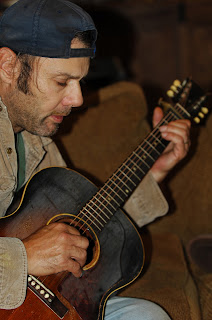 Malcolm Holcombe is considered one of the best folk/americana artists around, at home in his native USA, and across Europe. He is touring with his new CD, his ninth, entitled 'Down he River'.
I have to tell you that this will be one of the most honest and intense performers you will see in a long, long time. Malcolm's road has been hard and tough, but he lives to tell the tale with passion and humility. A remarkable performer.

This article details the travels through life that have brought Malcolm to BAG:

"Malcolm Holcombe.
In the end, our lives are simply gatherings of contradictions. We are capable of being cruel, funny, angry and unfathomably kind, sometimes all in the space of a few minutes. The same mouth that launched angry words at a driver who cut us off in traffic will kiss and sing a child to sleep. The wise ones among us know this, and the best artists embrace this paradox and use it to fuel their making.

Malcolm Holcombe’s new album Down the River, his ninth, is born from that bed of contradictions we all lie in. There are songs here such as “Twisted Arms” and “Whitewash Job” that sizzle with anger at a society that seems intent on losing its way and running over its poor and disenfranchised. These are coupled with songs from a softer, more generous perspective such as “The Crossing” and “In Your Mercy,” written in the voice of an old woman who sees “All I worked for/…sold and surely gone,” but who trusts that “many years will tell the truth.” There is truth embedded in these songs the way quartz is embedded in the steep driveways and black dirt of Malcolm Holcombe’s western .

The multiple perspectives of these songs speak of the man who wrote them. Malcolm Holcombe takes the stage in the same clothes he wore driving to the gig, and his soft voice, rasped from years of smoking and singing to be heard in honky tonks, rises to a howl as he frails his guitar with furious precision. He stomps, growls, rolls his eyes as he plays, then between songs cuts the tension with a corny joke. A veteran of Nashville who has little good to say about the music industry—“a bunch of people trying to buy their way to fame”—he has won the praise of such artists as Steve Earle and Lucinda Williams as he works and tours from his home in western North Carolina. A once-legendary drinker and hell raiser, Malcolm is now many years sober and embraces a gentle if non-specific spirituality.

Down the River is just the most recent step in a journey that began in western in 1955. The youngest of four children, Malcolm was fascinated by the guitar early, an interest he fed watching TV in his parents’ living room. “If it had a guitar in it, I’d watch it,” he has said. After high school and a brief stint in college, Malcolm played for a while with a trio called Redwing, then in a duet with Sam Milner. Eventually he found his way to where he established a local reputation and signed with Geffen Records.

In 1996, in one of those twists of logic only understood in the music business, Geffen signed Malcolm and paid to record his major label debut A Hundred Lies. The album was pressed, promotional copies were sent, and the album, a stunning, low-key masterpiece, was never released. In the wake of that fiasco, Malcolm made his way back to . A Hundred Lies was eventually released on a much smaller label and garnered some attention, including a four star review in Rolling Stone, and Malcolm began booking his own shows. There are stories from this time of drinking, drugs and wild behavior, but like most in recovery, Malcolm would rather let the past stay in the past. “It’s miracle to be here every day,” he offers. “I’m just glad to be able to drive on my side of the road.”

Newly married and sober, Malcolm released a series of independent records, then signed with a couple of small labels. Down the River is Malcolm’s first independent release in several years (the album will be distributed by Proper Music) and reunites Malcolm with Ray Kennedy, who produced earlier efforts like Gamblin’ House and For the Mission Baby. This album also boasts more recognizable guests than most of Malcolm’s earlier records. Emmylou Harris lends background vocals to “In Your Mercy,” and Malcolm duets with Steve Earle on “Trail of Money.” Darrell Scott plays dobro, banjo and electric guitar, and former Uncle Tupelo and Wilco member Ken Coomer handles drums. “I wanted to shoot for Mars,” Malcolm says of the high-powered lineup on this record. “Luckily, Ray knew some Martians.”

But the core of each cut is Holcombe’s voice, which can growl like a cement truck in low gear or mellow into a heart-tugging croon, and his guitar playing. Malcolm plays with his bare fingers and his percussive attack makes it easy to overlook the precision with which he plays. “I always forget what a good guitar player he is,” said an audience member after a recent Malcolm Holcombe show. “You think he’s just beating on it, but then you realize he’s fingerpicking really fast and not missing a note.” There is an intensity in Malcolm Holcombe’s performances that can put off those used to a more laid back product, but those who have watched him know that Malcolm Holcombe is not just playing for gas money. This is who he is and what he does.

This circles back to the righteous fury I spoke of in this new batch of songs. “I don’t claim a thing/ Not a two-bit clue/ But I heard somebody whisper/ War kills the truth,” he sings/ hollers on the album’s first cut “Butcher in Town.” Later, on “Twisted Arms,” he spits, “Fair and square/ Looks good on paper.” This arises from Holcombe’s view of present day society. “The subject is unavoidable,” he says about the political content of the songs. “There’s just an appalling amount of injustice and greed everywhere you turn.”

But it is not all storm and fury here. The pace is leavened by gentler songs such as “The Crossing” and “The Door,” a song from Holcombe’s back catalog. One song that will undoubtedly garner a good deal of attention is Malcolm’s duet with Steve Earle on “Trail of Money,” the album’s penultimate cut and one of the album’s highlights. But the album’s real masterpiece is the title cut and the final song on the album. Here the anger of earlier songs gives way to acceptance that understands the world has changed and not necessarily for the better. “They make the laws/ to suit themselves/ the ones that buy and sell the rest/ of us down the river,” Holcombe sings. But down the river is not as bad as it seems: “Down the river/ we pray for one another…we hold on to our dream.”

The acts of writing songs and playing music have always been hopeful ones, however the bleak the subject matter of the songs might be. With Down the River, Malcolm Holcombe has once again given us a handful of songs that are testimony to the human spirit. In these songs, the old truths still hold. Love, the inner life, music, these are eternal verities and will outlast the trickery and chicanery of those who would turn us against each other. In these strange and troubled times, we need Holcombe ’s witness as much as we ever have, and it is our good fortune to receive it."