Alas, Dear friends - The end of the road is just around the bend.... 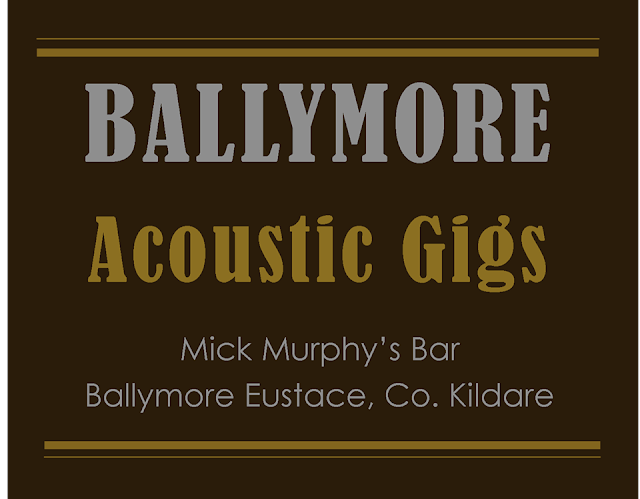 This is a difficult post to write; it was always going to be, no matter when it would come about, and its been coming for a while....

Eight years ago, I started down this road not knowing how far it would take me, or for how long.

For those who don't know, the gig was started almost 30 years ago by the late Larry Roddy.

Lar, who lived locally, was a promoter and agent to many of the finest overseas singer/songwriters ever to have toured this country, as well as a champion of emerging Irish artists, many of whom have gone on to forge successful careers at home, and abroad.

In the noughties, I worked with Lar for about five years as resident sound engineer when the Ballymore gig was hosted by The Ballymore Inn, just up the street from the gig's current home in Mick Murphy's, where its been since 2007. During that time I worked with many wonderful musicians, getting to know some quite well, and developing lifelong friendships with a few.

Lar and I went to other gigs together, spent days out rambling, birdwatching. He was one of my very favourite humans, and a dear, dear friend. I miss him, still. After his untimely death in 2010, I decided his musical legacy must not go down with him, that the gig must be kept going - not as a memorial to Lar, but because there was a demand for it, a need.

And so, in August 2011, I promoted my first gig. It would have pleased Lar no end, that Clive Barnes was the first act, as Lar had given him his first breaks on the scene some years earlier - Clive has often told me that he's certain that if Lar hadn't booked him and got behind him back then, helping to get him higher profile gigs opening for bigger acts, his career may never have got off the ground. Gavin Glass appeared with Clive on that first night, and while it was a quiet night, we were off and running.

Shortly after the first few gigs, I figured I needed to raise the profile of the gig and attempt to bring a wider audience. And so, BAG - Ballymore Acoustic Gigs was born, taking advantage of the rise of social media, and emailing lists - anathema to my predecessor! It was my attempt at branding, and it only went and worked! BAG has become known the world over, which is a testament to the gig itself, and the magic that happens in that little room of a Monday night.

Genuinely, I've never seen the gig as mine; rather, it belongs to the artists and the audience - I just bring the two together, and facilitate the magic happening.

Before a promoter can book a gig, there has to be a venue, a room in which the magic can happen. Mick Murphy's is a special room, in a pub full of character, barely touched, and utterly unspoiled by modernity. Phil and Sean Murphy have opened their doors to the music, week in, week out for thirteen years, and allowed me exclusive use of the room as a paying gig, discommoding their regulars in the process. That commitment to the music, and its tradition, has been hugely significant in the continuation of the gig.

In the past eight years, I've been fortunate to present some of the finest songwriters from home and abroad - some emerging, some household names with high profiles. Almost 150 separate artists have played the gig in my time. All of them, wonderful artists, from who's ranks I have drawn some deep and enduring friendships.

With a place to host the gig, and musicians to play the show "in the bag", as it were, the most important element has to be added - You, the audience. Without an audience, we don't have a gig. And audiences have come - week after week, after week. There are some (and you know who you are) that have scarcely missed a gig since the start. That support - that commitment - is not just impressive, and remarkable, but is deeply appreciated. That commitment has many times made the difference between a very quiet night, and a decent turnout, and payout for musicians.
I've had a couple of very quiet nights - five listeners - but both those shows were up there with the very best nights in Mick's. At the other end I've had nights when the packed house barely had room to applaud! That's what live music is all about: there's no knowing when the real magic is going to happen.That's why we're there, listening, anticipating.

But I've done all that I can do, and its time for me to step back. I am no longer able to dedicate the same level of time and energy required to keep the gig at its current level. And I won't do it by halves. Anyone who knows me, knows I'm all in, or nothing. All the possibilities have been considered - do it once a fortnight, once a month.... It still would require the same amount of effort, and mental energy, that I just don't have to spare anymore. Letting the gig slowly decline is simply not an option; that would disrespect it's history, and tradition. I intended to do this a year ago, but I thought I could keep it going, or maybe I just couldn't let it go. But, when it's time, it's time.

So, at the end of the current season at the end of May, I will bring the curtain down on my tenure at the helm of this great little gig.

There is, of course, a demand for the gig - from musicians and audience alike, and that is part of why I'm announcing this now - I'm receiving a lot of inquiries for bookings for the autumn, and beyond, and I can't keep these good people hanging any longer; they have tours to plan, and dates to fill.

I'll do all I can do to help anyone who'd like to take the gig on. But, its the end of the road for me.

This little gig, and all that has made it what it is, has enriched my life, and my own musical creativity in ways I cannot begin to articulate. So, to all who came and listened to a gig; came and played a gig; booked, or set up a gig; and to the Murphy family for hosting them all, I extend my sincere, deep, and profound gratitude. I am indebted to you all.

Meanwhile, there are two months of gigs to go before the curtain call. Come one, come all; let's go out on a high!

P.s. The Annual "Vibe For Larry" will continue on, as has become traditional.