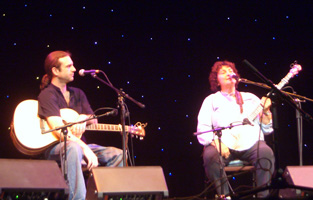 Jeff and Vida met in in 1997 but soon left for where they began writing and performing on a regular basis.  They quickly became a force on the music scene, winning multiple awards and building a solid following among fans and critics alike.  They began touring full time in 2001 and have since played more than 200 dates a year across the and . They released four studio recordings, along with a live disc, to wide critical acclaim.
Following Hurricane Katrina in 2005, Jeff and Vida relocated to where they became part of the burgeoning alternative music scene. A performance at the Ryman Auditorium and a New York Times article which featured them alongside neighbors Old Crow Medicine Show, Gillian Welch and Todd Snider, is a sure sign their music is welcome wherever they choose to hang their hats.
Jeff and Vida’s nine years of performing and songwriting, have seen them delve into many different genres of music; country, honky-tonk, rockabilly, even a little rock and roll.  But throughout their career, which has included four critically acclaimed albums, literally thousands of live shows in the and Europe, and a move from to , bluegrass has remained a key influence in their style and sound.  Nowhere is this more evident than on their new CD, Selma Chalk.
The new record features thirteen original songs, a stellar band, and an enigmatic name. Inside the CD jacket, chalk  is defined as “an impurity in the most fertile soil of the South”.  Intentional or not, the title seems an apt metaphor for the music contained within- an outsiders’ take on fertile traditions of Southern and Appalachian string band music.  Indeed, a number of tracks do fit neatly into what might be called a ‘traditional bluegrass’ sound. More often than not however, the record bends bluegrass instrumentation around material that's a little edgier, a little bluesier and a little rougher than your typical bluegrass album. 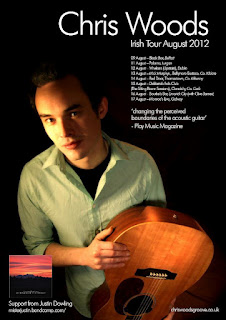 ‘Chris Woods is one of the ’s most exciting instrumentalists. His performances are a blend of endearing stories with ear bending drop tuned grooves. Displaying dazzling creativity and skill, by mixing emotive and imaginative sounds with stunning technique. You wont forget what you hear.’