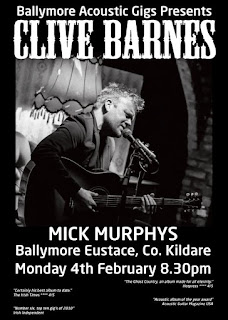 
THE SPECIAL CONSENSUS is a superb four person acoustic bluegrass band that began performing in the in the spring of 1975.
Co-founded by tenor banjo player, Greg Cahill, the band has seen many changes in line-up over the years, but the musicianship and powerful performance have remained at the heart of this great band.

‘Special C’, as the band are affectionately known, have toured the world over, including previous trips to Ireland; I’m delighted to welcome them back to Ballymore on this tour, where they will present their current CD, ‘Scratch Gravel Road’.

Scratch is the 16th recording released by Special C. This is a “special” recording because most of the songs were given to the band by top Nashville songwriters, including Dixie and Tom T. Hall, Tim Stafford and Jon Weisberger, Brink Brinkman and Tony Rackley, Craig Market, Becky Buller and even Harley Allen and Herb Ford. The recording features the current band lineup of founder Greg Cahill, David Thomas, Rick Faris and Dustin Benson. The somewhat “epic” song about Bill Monroe, called “,” includes guest vocal appearances by Special C alums Josh Williams and Chris Jones along with the fabulous fiddling of Stuart Duncan.

Full Bios for all the band here: http://www.specialc.com/Bios.php