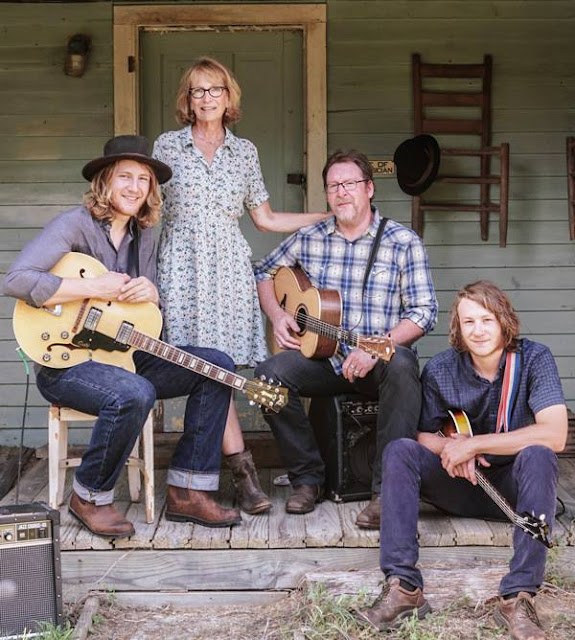 Tim Grimm returns to Mick Murphy's, Ballymore Eustace, Co. Kildare on Monday, May 22nd. This time, though, he does so as 'Tim Grimm and The Family Band', supported ably by sons Jackson (guitars, banjo, octave, mandolin and backing vocals) and Connor (bass), and wife Jan Lucas (harmonica, and backing vocals).
Touring their new record, 'A Stranger In Time', they come to us at the end of a European Tour in support of the CD. Read a fine review of the record here:
http://getreadytorock.me.uk/blog/2017/03/album-review-tim-grimm-and-the-family-band-a-stranger-in-this-time/

First three tracks from the new album, 'A Stranger In Time', here:
https://soundcloud.com/cavalier-musicmanagement/sets/the-first-3-songs-from-tim

Those of you who caught Tim on his previous visits with us, will know that this will be a great night. The musicianship of his sons, Jackson and Connor; beautiful backing vocals by his wife, Jan, and Tim's trademark richly evocative songwriting, guarantee it.


Krista Detor returns to BAG at Mick Murphy's, Ballymore Eustace, Co. Kildare, on Monday, May 15th, 2017 for her third appearance. As ever, she will be accompanied by her husband, producer and guitarist, David Weber. On both of her previous visits, Krista has left her audience awe-struck after stunning, powerful, and utterly captivating performances. It is hard to over-recommend this show!
Doors open at 8:30pm. Admission is €12 at the door.

Here's a link to videos and sounds: http://kristadetor.com/index.php?page=video

"She is not just a songwriter, nor accomplished musician, nor poignant entertainer - I have been awed by the soul-punching talent of Krista Detor.." - WNC Magazine (Feb. 2015)

MusicDish magazine calls her work: "..like Richard Wright’s 'Manchild in the Promised Land' or the musical equivalent of Akira Kurosawa’s 'Dreams';" The Allmusic Guide calls her “An artist of rare ability with a deep poetic gift,” and Rolling Stone, "A small miracle."  Krista Detor’s solo albums have reached national and international prominence, including #1 on the Euro-Americana Chart, and placement within the top 10 of the U.S. Folk and Independent Music charts, but she is no ordinary songwriter: Detor has been involved in several award-winning collaborations, including the highly-acclaimed 'Wilderness Plots,' (PBS national), for which she and fellow writers, including American College of Arts & Letters inductee author Scott Russell Sanders, were recognized by the Indiana Legislature for contributions to the arts (2010), and which resulted in (2) Emmy nominations and a Golden Eagle award.

She was the only American woman invited to The BBC's Darwin Songhouse Project, Shrewsbury England (2009); Says Neil Pearson, Producer of the project: “Krista is one of the very finest modern songwriters at writing within character; and her ability to convey the emotions of the people that inhabit her songs is utterly convincing and believable.. The compelling way the narratives are delivered make one of the most flexible and empathetic writers. Her understanding of the human condition and her ability to express the motivation for her characters give her songs real impact and resonance with the listener.”

She has been commissioned to write musical theatre for The U.S. Dept. of State in New Delhi, India (2012); For the Indiana Arts Commission ('The Breeze Bends the Grass,' recipient of the Indiana Arts Commission's Masterpieces Grant - 2016); and has written commissioned choral pieces for several national and int'l choirs. In addition, she's been a returning presenter at Stanford University, wherein, her album, 'Chocolate Paper Suites' was a multi-year ‘required reading’ assignment for the literature course, "The 'isms of Modernism," in which students sought to explore modernism's impact on, and negotiation with, contemporary culture and art. Says Dr. Rod Taylor of the album, “This album provides an excellent example of how the most salient elements of modernist art and philosophy persist in postmodern culture. Its poetic and intertextual lyrics, captivating melodies, meaningful organization, and complex narrative thread will undoubtedly lead to rich discussions among my students.” She has conducted songwriting seminars, performances and presentations at universities and arts centers throughout the world, including Ireland's prestigious IMRO performing rights organization. In February, 2015, she was Artist-in-Residence at the renowned Hedgebrook foundation.

Krista will conduct the first of her signature cross-cultural collaborations, along with Dr. Rod C. Taylor, in Northern Ireland, May, 2017 - taking 20 songwriters on an immersive, 10-day songwriting retreat in the beautiful Mourne Mountains, County Down. In 2018, she hopes to host 12 Northern Irish writers for a similar experience in the U.S. She continues to tour the U.S., U.K., and Europe all the while. She's shared stages with Victor Wooten, Chuck Rainey, Loudon Wainwright, The Neville Bros. and Suzanne Vega, among many others.

Krista lives in Bloomington, Indiana.
You can find her on all social networking sites and at KristaDetor.com
Posted by BAG at 10:50 No comments: