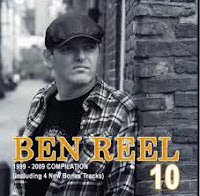 Ben Reel plays rock with a touch of roots, blues & soul with an occasional injection of reggae. Critically acclaimed all over Europe, his vocals are soulful and his lyrics meaningful. Lately Ben has earned the respect and shared the stage with some Nashville greats like Nancy Griffith, Hal Kethcum, Eric Andersen & David Olney

Since his debut back in 1999, each album has gone from strength to strength, covering different styles of music along the way from rock, soul, and roots to reggae to funk. Ben’s music has evolved into an honest earthy, soulful sound that has matured like a fine wine. This can be heard on this new 18 song collection.

In the last 10 years he has had numerous high profile TV & Radio appearances and airplay under his belt including Bob Harris BBC Radio 2 and has supported celebrated names like Jools Holland, Alabama 3 and The Cranberries. He has performed his radio hit U People with the late great Ian Dury’s legendary Blockheads , and has recorded the song with award winning saxophonist Gilard Atzman. The song U people will feature on the new compilation.

Also over the last 5 years Ben has enjoyed successful tours in Europe, receiving rave reviews and attracting a growing fan base which has lead to being invited to play the prestigious Dutch festival Huntenpop (www.huntenpop.nl) August 2010 . Along the way he has played with some of the finest musicians in Ireland and has built a loyal underground following. Often described as an artist lying beneath the radar for way too long. 2011 was a busy year with showcase gigs in Nashville & Memphis in and tours in Germany ,Holland and Belguim.

Support on the night comes from Internationally acclaimed and Grammy nominated Flamenco guitarist, Cano. Cano (Juan Antonio Suarez) is in Ireland for the second Dublin Flamenco Festival and comes to spread the beauty and passion of Flamenco guitar. Cano will take the stage at 9pm sharp.