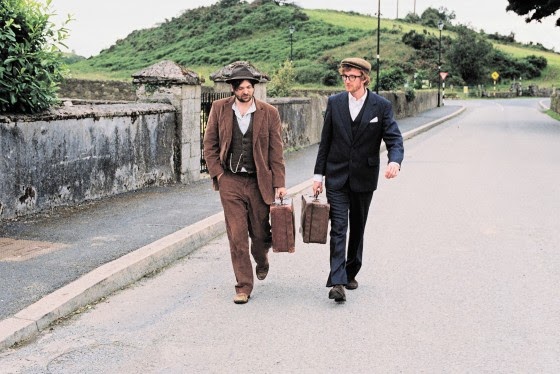 Currently busy writing and recording their fourth studio album, super young Irish folk duo, The Lost Brothers, are embarking on a few dates around the country, and I'm delighted to welcome them back to Mick Murphy's Stage Inn, Ballymore Eustace, Co. Kildare on Monday, February 17. Doors 8:30pm; Show: 9:15pm. Admission, on the door, is just €12

The Lost Brothers - Oisin Leech and Mark McCausland, both on vocals and guitars - first met in Liverpool in 2007, having decamped from Ireland separately to further their individual careers with their respective bands. The

Shared musical loves, and influences, which included and ranged between acts from Phil Spector to The Louvin Brothers, the Carter Family to Sam Cooke, The Impressions to Van Morrison, inevitably brought the lads together for occasional gigs together on the Liverpool scene. When together, fans referred to them as The Lost Brothers, and so it began.

After moving to Portland, Oregan to record their folk-tinged debut album, they returned to the UK releasing 'Trails of The Lonely' in 2008. Touring constantly, honing their craft as the went, they released their second album ' So Long John Fante' in 2011. With a growing profile, and increased exposure they were noticed by Raconteur Brendan Benson, who brought them out to his Nashville studio to record their third, and best album yet 'The Passing of The Night'. Released in late 2012 to critical acclaim, it achieved good airplay and recognition. And so we await their fourth offering....

The future looks mighty bright for these fine gentlemen.

As they say themselves: 'Well, alright!'