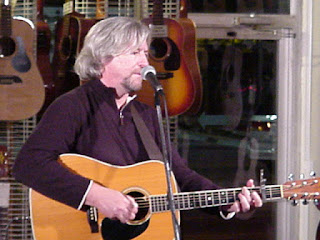 Buddy Mondlock is a Ballymore favourite, returning annually. This time he is once again joined by his great friend, and super Bass player, Mike Lindauer.
Together, they play BAG at Mick Murphy's, Ballymore Eustace, Co. Kildare on Monday, November 26, showtime 9pm.


When Buddy's not on the road you can find him in but he grew up in Park Forest , a suburb of .  He once opened for the amazing Steve Goodman (wrote the great song' Souvenirs' recorded by John Prine) there on New Years Eve. Buddy was 21. Says he could have walked out of there that night and gotten hit by a bus and he wouldn’t have felt like life cheated him at all.

”Discovered” in 1987 when Texan Guy Clark heard him singing one of his songs under a tree at the Kerrville Folk Festival, Buddy has since released several solo albums. Over the years artists such as Nanci Griffith, Joan Baez, Janis Ian and have all recorded Buddy’s songs.

Writing, recording and touring collaborations with artists such as Art Garfunkel have helped bring Buddy to a wider audience and garnered him international critical acclaim.

Now Buddy’s back with a long-awaited new CD, hitting the road performing and leading songwriting workshops, and of course, writing songs. Cause that’s what he does and that’s who he is. Lean in and listen, you won’t be sorry.