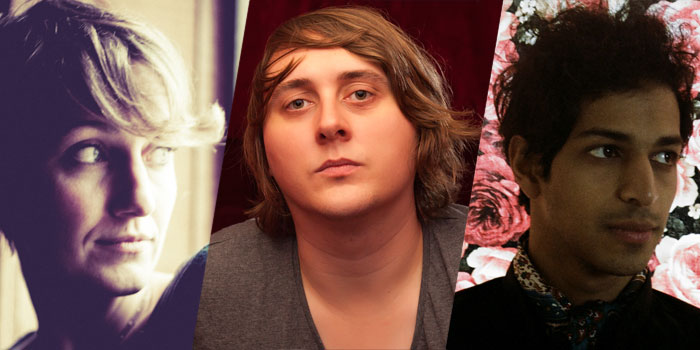 Very exciting triple-header of highly regarded artistes, whose careers are on the cusp of something really special. Three acts with a rich, folk/country/roots sound. Highly recommended, all. The running is mixed up for each show on the tour, and for Ballymore will be as follows: John Blek, followed by Vikesh Kapoor, followed by Joan Shelley.
Gig will start 9pm sharp.

It's a pleasure to welcome Joan, all the way from Kentucky, for her debut BAG appearance.

From Joan's website: "Joan Shelley‘s music is startling, but not for its racket. It startles because of its closeness, the near-instant sense of familiarity we feel when we hear it. Her songs fill up the air around us, echoing like a voice lost in the later American and British folk revivals – some Anne Briggs here, a little Hedy West there. But none of them are “trad arr. Shelley.” Joan wrote them all. Listen to her sing and it’s evident. You’ve never heard that voice before, either."

"There is an otherness, a soft stillness in Joan Shelley’s voice, that seeks meaning in experience and memory...With the grace of good timing she tours here next month. Not to be missed." - Joe Breen, Irish Times.

Here's a New York Times review of a recent gig in Brookyln:

"throughout the set, she was open yet composed, never pushing or overplaying the music; she let the songs speak for themselves. With its quiet purity, the music held the club audience rapt."

Great to welcome John back to BAG, after his brilliant opening set for Mick Flannery/Casey Black.

Ahead of the release of the album, HotPress said: "A Rats-less John Blek has announced the November 28 release of Cutting Room Floor, a collection of nine stripped down alt. folk numbers that were recorded in a 20-hour studio binge." - the album has since been very well received.

This from John Blek and The Rats' website (it's all true of John's solo sound - just more stripped down, with less 'lunacy'!): John Blek & The Rats are a six-piece folk and country group from Cork City whose infectious brand of Americana influenced balladry has travelled up and down the roads of Ireland, the UK and Europe, kicking up the dust in the dark corners for the last few years.
Born in the modern day dust bowl that is Ireland, John Blek & The Rats take inspiration from range of musical styles such as the outlaw country of Willie Nelson, the protest ballads of Woody Guthrie, the 100 mile-an-hour lyricism of Jack Keruoac and the melancholic country rock of Neil Young. Despite their musical roots being deeply embedded in the past, John Blek & The Rats have a sound that is fresh and modern, while also doffing its hat to a gone bye era. The streak of melancholy that runs throughout their music is tempered only by their penchant for footstomping rhythms and contagious choruses, a passion for revelry and, at times, lunacy."

Prior to taking this booking, I'd never heard of Vikesh; you probably hadn't either. You'll be hearing much more of him from now on, I'm pretty sure of that. You can say you were in from the start... well, almost!

This, from an article in The New Yorker, in October 2013, celebrating the centenary (+1) of Woody Guthrie's birth:
"Kapoor has a Guthrie-like origin story of his own: raised in rural Pennsylvania, he attended college briefly before becoming a mason’s apprentice, and then, after performing at the funeral of the activist and author Howard Zinn, in 2010, devoted himself to political songcraft. The result of Kapoor’s artistic awakening, “The Ballad of Willy Robbins,” is out this month, and in songs like the title track and “Bottom of the Ladder,” he delivers a series of sharply etched portraits of struggling Americans that points back along a road of socially conscious songs. Guthrie is standing at the head of that road".