Folks, we're in for a treat with this show - superb musicianship, beautiful voice, and a wide range of styles in her repertoire. Highly recommended.

Rising star Sarah McQuaid’s voice has been likened to malt whiskey, melted chocolate and “honey poured into wine” (Minor 7th). A captivating performer, she seduces her audience with cheeky banter and stories from the road, as well as with stunning musicianship; in her hands, the guitar becomes much more than merely an accompanying instrument.

Her musical output reflects her own eclectic background: Sarah was born in , raised in , holds dual US and Irish citizenship, and now lives in rural . Refusing to be pigeonholed, she spans the genres with both her beautifully crafted originals and her interpretations of material from around the globe and down the centuries. Sarah’s third solo album The Plum Tree and the Rose has drawn critical acclaim on both sides of the Atlantic: “Impeccable,” wrote fRoots (UK), while Midwest Record (USA) called it “low key but glorious and incendiary” and Hot Press (Ireland) said it “should feature on many end-of-year best-ofs.”

For videos of Sarah performing live click on this link: http://www.youtube.com/sarahmcquaid 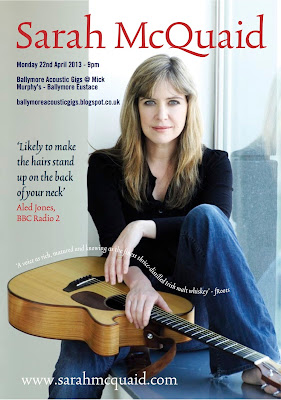