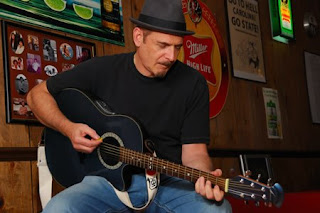 http://www.tokyorosenthal.com/tokyo_rosenthal/home.html
Tokyo Rosenthal plays his debut BAG show at Mick Murphy's Bar, Ballymore Eustace, Co. Kildare on Monday May 13. Doors 8:15pm; Gig 9pm sharp. Admission is €12 on the door.
"This is Americana with real teeth in the lyrics"
... "Take Jackson Browne’s personal confessions and wrap them in Kris Kristofferson’s world weary tales of broken relationships and you have an idea of what to expect from Tokyo Rosenthal."
"Rosenthal can draw you into his lyrics much the same way that James Taylor and Don Henley can".
High praise, indeed- but well warranted; I've been listening to the new CD - 'Tokyo's Fifth' - and I can honestly say that I'm really looking forward to seeing Tokyo Rosenthal live and in person. Great songs filled with love, hope and compassion.

The quotes above, and more, is what the critics are saying about Tokyo Rosenthal. But it wasn’t an overnight trip. Hardly, as "Toke" has spanned the music scene for three decades. But it was in 2007 when recognition finally reached him through the recording of his CD, "One Score And Ten".
In a career that started with the country rock boom, Rosenthal has honed his craft and "Rootsy/ Americana with a little blues thrown in" sound to perfection.
2012 was busy both on the touring front and recording. Tokyo headlined at The Bitter End for the third time while extensively performing all over the East Coast including The Avalon Theater in Easton, Maryland. He also returned to Austin, Texas to perform at SXSW and was web cast live from Threadgill's on Music Fog. But the highlight of the year was his Ireland tour where Toke covered the land from County Clare up to Belfast getting rave reviews everywhere he gigged.

Finally he returned to the studio to record "Tokyo's Fifth". The early released single and video, "What Did I Used To Be?" went "mini-viral" as Toke once again took on sensitive political and social topics. "Tokyo's Fifth" is scheduled for release in January of 2013. Toke is joined on the record by Chris Stamey, John Teer, Charlie Chamberlain, Allyn Love, and Andrea Connolly, among others.

Always writing and always gigging, his musical journey continues, and now brings him to Ballymore; come and join him on his road.